History of the Covered Bridge

More than 40 covered bridges once dotted the Wisconsin countryside. The Cedarburg bridge, originally known as the "Red Bridge", located 3 miles north of the City of Cedarburg and 20 miles north of Milwaukee near the junction of Highways 60 and 143 on the Covered Bridge Road.

After 85 years of continuous service, the old landmark began a life of semi-retirement. A modern span was built beside the old bridge which is now used exclusively for pedestrian traffic.

Built in 1876, the original span measured 120 feet long and 12 feet wide. Its construction was of a certain type of pine found near Baraboo, Wisconsin. All of the timber and planks were cut and squared in a mill near that city. The lumber was then hauled to the proposed site on Cedar Creek where all pieces were fitted and set in place. 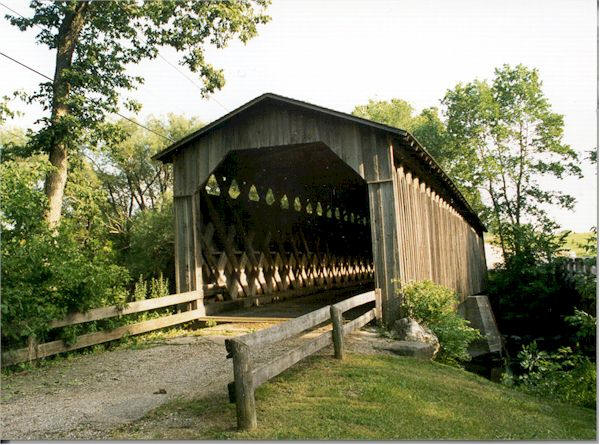 The type of construction is known as lattice truss with interlacing 3 by 10 inch planks all held together by 2 inch hardwood pins and floored with 3 inch planking. It is now very rare. In 1927, a center abutment was placed to carry the heavier traffic of automobiles and trucks.

There were many prominent farmers living in the vicinity of this covered bridge, whose descendants are still living in this area. The names of some of these early settlers were the Kaehlers, Krohns, Ernsts, Hickeys, Corrigans, Mintzlaffs, Schellenbergs, and Pollows. In 1940, the Ozaukee County Board voted to forever preserve this structure as an historic monument.
Many and varied reasons are given why such bridges were covered. Some say it was to shelter travelers in storms and others hint of refuge from the Indians. There are 2 more reasonable conclusions, to preserve the truss structure and the fact that the teams of oxen used by the area farmers had a fear of crossing the water on an open bridge and frequently balked. One old legend states that the covered bridge leveled off the farmers' hay loads as they passed through. Another local legend has it that a member of a county crew once drove through this bridge with his tractor, fully equipped with a snowplow and dragging scrapers. Suddenly realizing that tractors were strictly prohibited, turned around, recrossed the bridge, and splashed his way back through the creek, confident that his wrong had been righted 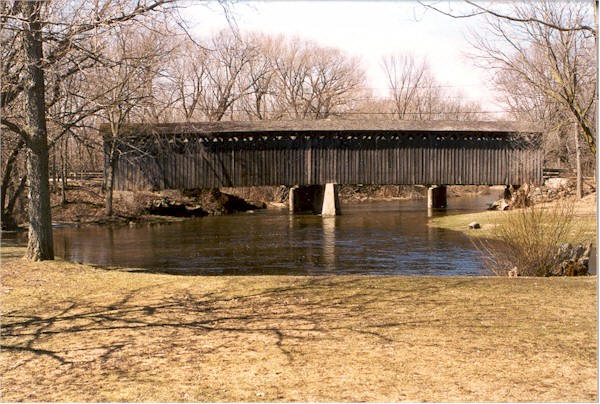 Future incidents like this are unlikely, since the bridge is now an historic monument. On October 1, 1955, the Port Washington Chapter, Daughters of the American Revolution, added to the bridge its one modern embellishment, a plaque which reads:
1876 - 1955
Last Covered Bridge in Wisconsin

This bridge was built by the Town of Cedarburg on petition of neighboring farmers to replace periodically washed out bridges. Pine logs, cut and milled at Baraboo, were fitted and set in place in lattice truss construction with 3 by 10 inch planks secured by 2 inch hardwood pins, eliminating the use of nails or bolts, and floored by 3 inch planking. The Ozaukee County Board in 1940 voted to assume the preservation and maintenance of this bridge.