The WDNR has developed a draft predictive fisheries model for main rivers and streams in Wisconsin, covering approximately 79 fish species. This theoretical model uses several variables including temperature, hydrologic models, land-use associations, and archived species occurrence data to predict both species occurrence and abundance. However, this is a coarse, state-wide model focused on larger rivers and streams and does not include any localized in-stream habitat characteristics.

In response, qualitative fish habitat rating assessments have been completed on 27 tributary streams within the Milwaukee Estuary AOC and Lake Michigan Basin, using a protocol developed by Ozaukee County Planning and Parks Department staff based on the WDNR’s “Guidelines for Qualitative Physical Habitat Evaluation of Wadable Streams” protocols for streams < 10 m wide. This protocol has been refined to include habitat measurements that are compatible with the USGS Habitat Suitability Index (HSI). The habitat assessment measurements were used in a model based on the USGS HSI to create scores for individual fish species in each habitat assessment station. These habitat assessments are used in conjunction with a fisheries data layer for estimating the overall habitat quality of the various stream reaches and potential for various target species occurrence. Stream measurements fall under two broad categories: physical characteristics and water quality. From the 15 primary field measurements, each target species’ specific habitat requirements are derived and scored according to USGS HSI models.

Model outputs provide both an indication of the overall stream quality and of habitat conditions for the targeted species. These outputs have been extrapolated to their corresponding representative stream reaches, helping assess the main project river or stream and its potential to support the occurrence or reproduction of focal/Species of Local Conservation Interest (SLCIs) fish species. The model outputs are used by the Ozaukee County Planning and Parks Department and other local partners to inform decisions involving priorities for potential habitat restoration and protection projects.

The full report can be found here.

Within each stream reach, stations were selected to capture local land use changes and provide a representative collection of data for each stream. The number of stations for each stream was determined by land use diversity and overall length and width of the stream. Stations were selected based on representation of stream order increases, significant land use changes, stream natural community changes, adequate spatial representation, and average stream width and length. A longer overall stream length resulted in more stations; each additional station was chosen based upon the above listed variables as well as proximity to any major confluences, topographical changes, or extraneous circumstances. This methodology allowed for the representation of more land uses and stream orders within our stations and provides an inclusive baseline for future assessments.

Station length was determined using the mean stream width (MSW), calculated from the average of a minimum of 5 preliminary sample transects within the station, multiplied by 35. Each station was divided into 12 transects where instream and riparian habitat features were assessed. All transects were perpendicular to the stream channel and began one MSW from the beginning of the station and spaced approximately 3 MSW distances apart. 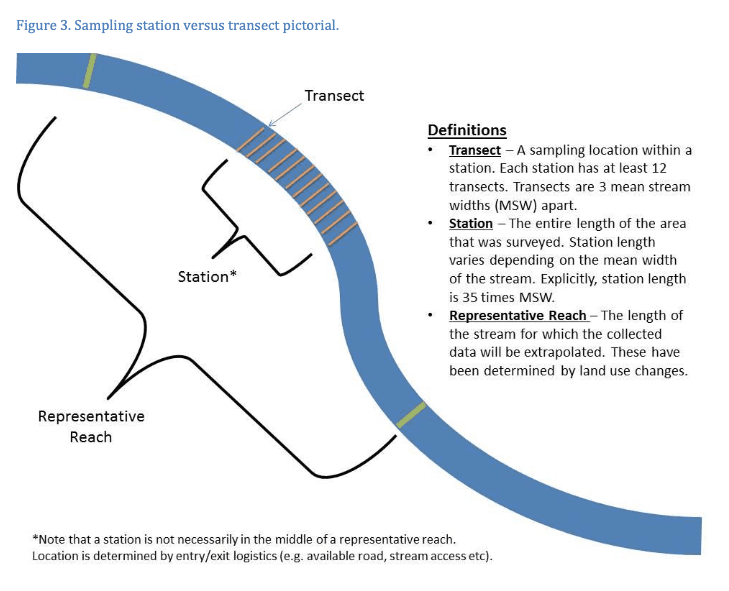 A qualitative habitat assessment was performed across 12 transects within each sampling station to evaluate habitat attributes, with an emphasis on fish habitat features. Both physical and visual measurements were used to generate an inclusive score that correlates to the quality of habitat conditions.

A suite of measurements were collected at each sampling station for entry into the fisheries matrix. This provided the information necessary to calculate individual HSI scores of the selected fish species. Habitat requirements often used the same measured parameter between many species, such as water temperature, to determine the final HSI score. 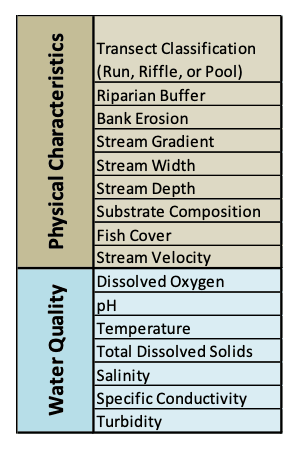 Sampling stations with the greatest quantity of ideal habitat are assigned high-value scores (excellent, good) while stations containing less desirable habitat are assigned lower value scores (fair, poor). The resulting numeric scores rates the ability of the habitat to support the reproduction of desirable fish species, with the primary belief that habitat diversity and quality directly influences the fish population as well as community structure and diversity. 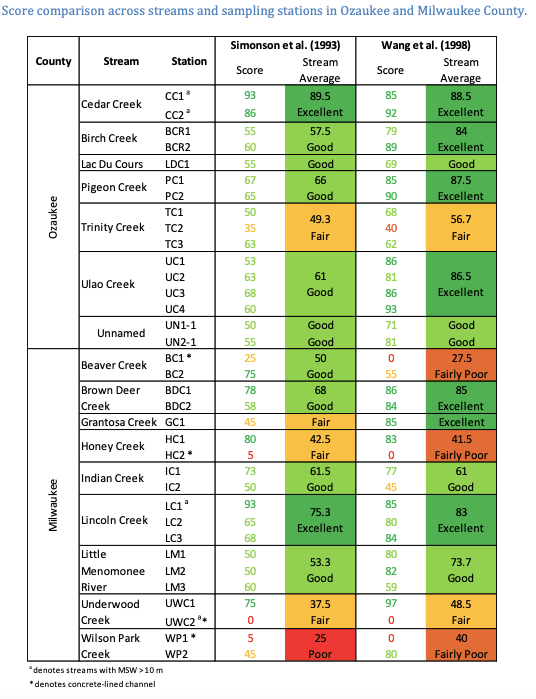 The fish community was surveyed by trained Ozaukee County Planning and Parks Department staff using a backpack or tote barge electrofishing unit at each sampling station to confirm the presence of native and/or indicator fish species. All captured fish were identified to species level and lengths of game fish and evidence of natural reproduction (i.e. young of year fish) were noted. Fish were also inspected for deformities, eroded fins, lesions, and tumors prior to return to the river. All data was collected at normal or low flow conditions between the months of July and October 2017. Survey data enabled the calculation of total catch per unit effort, target species catch per unit effort, species richness, and Index of Biotic Integrity (IBI) scores.

Habitat assessment data and results of the fish surveys were incorporated into a GIS fisheries data layer that can be used for estimating the potential for various focal species occurrence based on the overall habitat quality of the stream reaches. The series of maps also includes limiting factors preventing each species from inhabiting a stream reach.

Stations were extrapolated to include the larger upstream and downstream reach of similar land use based on GIS land use data. A separate GIS layer was created showing HSI values for each of the 12 fish species in the sampled station as well as the extrapolated reach. Values were color coded on a 0-1 red to green scale based on the presence and amount of species-specific habitat features that correlates with the potential for various target species occurrence. Below is an example of a map that was produced for northern pike on Cedar Creek. 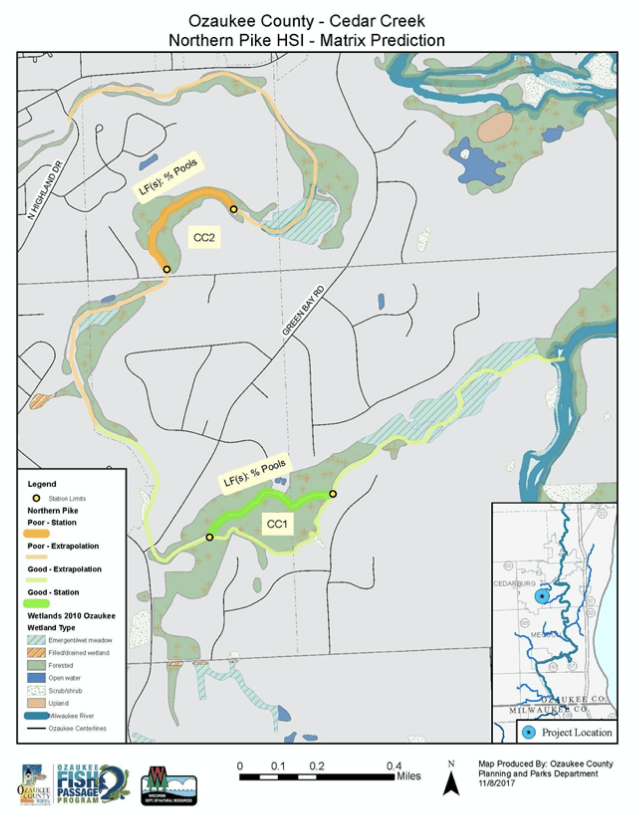 The results of the habitat assessments were used in conjunction with the fish community survey data to calculate the matrix model HSI scores for the selected fish species at each sampling location. The matrix output scores determines the suitability of habitat for each focal fish species and corresponding potential for species occurrence. The output values were extrapolated to their corresponding representative stream reaches, helping to assess habitat characteristics of the AOC tributary project streams and the potential to support the occurrence or reproduction fish species of local conservation interest. 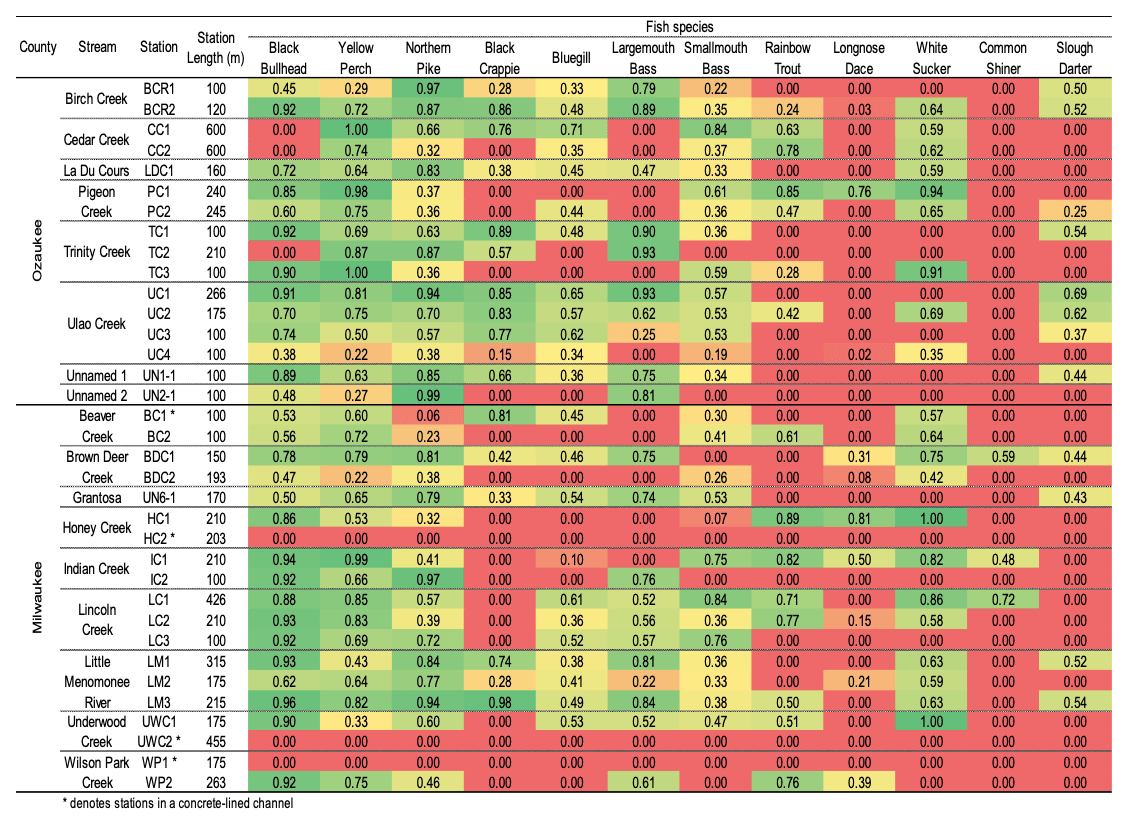